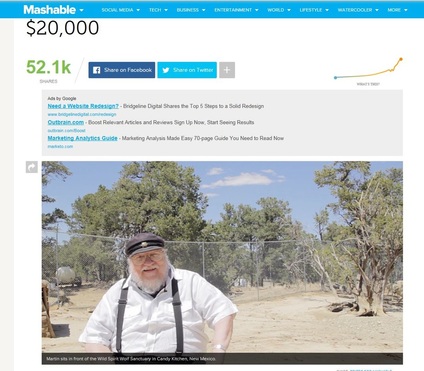 A gory death at the hands of Game of Thrones mastermind George R.R. Martin can be yours for the one-time price of $20,000. The death will, of course, be of the text-only variety.

The honor is reserved for a top-tier donator on Martin's Prizeo crowdfunding campaign, raising money to support the Wild Spirit Wolf Sanctuary and Food Depot in Martin's adopted hometown of Santa Fe, New Mexico. The winner will choose their character's position in the fictional world (lordling, maester, peasant, whore, etc.) and meet a grisly death that could rival the Red Wedding.


If you don't have $20,000 on hand, don't worry. Everyone who donates any amount is automatically entered to win a tour of the wolf sanctuary and take a helicopter ride with the author/murderer-of-all-hopes-and-dreams himself. Other donation tiers include signed maps of Westeros, show scripts and Martin's own hat.

Martin and his wife, Parris McBride, have donated money and helped raise funds for the wolf sanctuary for several years. The sanctuary now houses more than 60 wolves and wolf-dogs, including a pack of nine named after the warring continent of Westeros featured in Martin's A Song of Ice and Fire series. CONTINUE READING 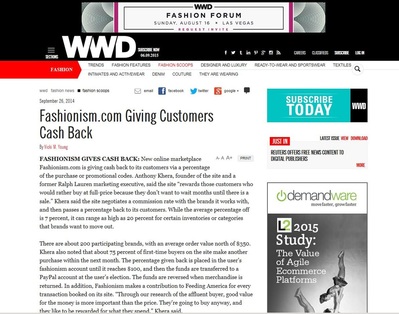 FASHIONISM GIVES CASH BACK: New online marketplace Fashionism.com is giving cash back to its customers via a percentage of the purchase or promotional codes. Anthony Khera, founder of the site and a former Ralph Lauren marketing executive, said the site “rewards those customers who would rather buy at full-price because they don’t want to wait months until there is a sale.” Khera said the site negotiates a commission rate with the brands it works with, and then passes a percentage back to its customers. While the average percentage off is 7 percent, it can range as high as 20 percent for certain inventories or categories that brands want to move out.

There are about 200 participating brands, with an average order value north of $350. Khera also noted that about 75 percent of first-time buyers on the site make another purchase within the next month. The percentage given back is placed in the user’s fashionism account until it reaches $100, and then the funds are transferred to a PayPal account at the user’s election. The funds are reversed when merchandise is returned. In addition, Fashionism makes a contribution to Feeding America for every transaction booked on its site. “Through our research of the affluent buyer, good value for the money is more important than the price. They’re going to buy anyway, and they like to be rewarded for what they spend,” Khera said. CONTINUE READING 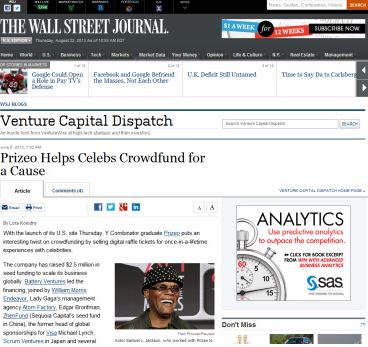 With the launch of its U.S. site Thursday, Y Combinator graduate Prizeo puts an interesting twist on crowdfunding by selling digital raffle tickets for once-in-a-lifetime experiences with celebrities.

“We basically tried to find investment from people who understood what we were trying to do…and can help us make this a global phenomenon,” Chief Executive Bryan Baum said.

The West Hollywood startup enables celebrities to use the site to raise money from fans for charities they support.

Unlike Indiegogo, Fundly and other crowdfunding platforms, Prizeo built its site specifically to help celebrities put their buzzworthiness and talents to good use.  To entice big names, Prizeo recruits celebrities through their agencies, charities and brands they already work with on various philanthropic efforts. CONTINUE READING 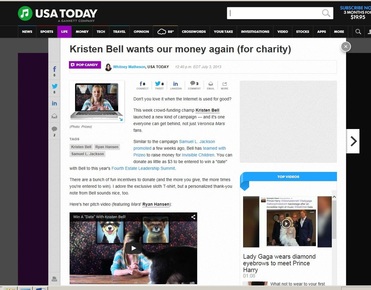 Don't you love it when the Internet is used for good?

This week crowd-funding champ Kristen Bell launched a new kind of campaign — and it's one everyone can get behind, not just Veronica Mars fans.

Similar to the campaign Samuel L. Jackson promoted a few weeks ago, Bell has teamed with Prizeo to raise money for Invisible Children. You can donate as little as $3 to be entered to win a "date" with Bell to this year's Fourth Estate Leadership Summit.

There are a bunch of fun incentives to donate (and the more you give, the more times you're entered to win). I adore the exclusive sloth T-shirt, but a personalized thank-you note from Bell sounds nice.  Here's her pitch video (featuring Mars' Ryan Hansen): CONTINUE READING 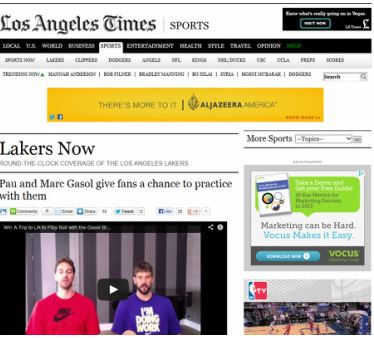 For a donation benefiting the Gasol Foundation, Pau and Marc Gasol are offering the chance to win a prize package that includes a game of two-on-two in Los Angeles.

Through the website Prizeo.com, donations start as low as $3 for a single entry.  Larger donations will be rewarded with signed photos or shoes, signed by the Gasol brothers -- along with multiple contest entries.

The grand prize winner (and a friend) will be flown to Los Angeles, provided accommodations and on Sept. 27, will get the chance to participate in a workout, followed by lunch, with the Gasols.

"We are excited about our partnership with Prizeo because one of the best ways to reach and engage with our fans is through social media,” said Marc Gasol of the Memphis Grizzlies.  "So it only makes sense that we would use a highly social, online campaign to make our fans aware of our mission with the Gasol Foundation and give them a chance to join us in our work to reduce childhood obesity."

Said Pau Gasol of the Lakers: "We hope to build a community around these critical children’s health issues and our Prizeo campaign is an important first step in reaching out to our fans to start a dialogue which we hope will lead to healthier dietary and exercise decisions in youth.” CONTINUE READING 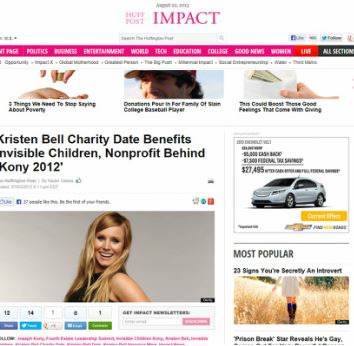 After the “Veronica Mars” Kickstarter campaign proved to be a smash hit, Kristen Bell has returned for a repeat charity performance.

The sloth-loving actress is offering the chance to win a date with her by donating to a campaign that benefits Invisible Children. The nonprofit helps to rehabilitate children affected by the Lord’s Resistance Army and is working to put an end to the group’s atrocities.

After handing over $3, fans will be eligible to be Bell’s plus one at the Fourth Leadership Summit in August –- an event that will address human rights issues while also featuring films, music and TED talks.

"Invisible Children started as a promise from its founders to a young boy in Uganda that they would do everything in their power to stop Joseph Kony and his army from abducting children and terrorizing an entire region," the “Forgetting Sarah Marshall” star said in a statement about her commitment to the cause. "The organization has been close to my heart since I saw their first film and it's an honor to have become a part of this story that is saving lives and defining a generation."As for the terms of the date, well, she was also pretty clear about how that, too.  CONTINUE READING